This hilarious one-camera american sitcom, Brooklyn Nine-Nine, set in a New York City police department, follows the amusing antics of Detective Jacob ‘Jake’ Peralta and his companions as they try to solve crimes and look good whilst doing it. If you are a fan of this show then you already appreciate the clever and witty writing and the strong character development. It’s perfect for binge-watching. The awesome mixture of humour, action and heart-felt friendships, this show will leave you asking for more and relating real bad.

Why not show your love for this show and pick a suitable nickname for your Year 12 jersey? Why not deck out the whole squad in your favourite Brooklyn Nine-Nine characters? wWhether your the teacher’s pet Amy Santiago or the sassy and shady Administrator Gina Linetti, there’s a name for everybody… 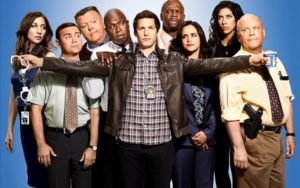 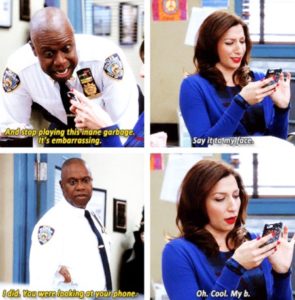 Still can’t choose a nickname? Why not head over to our friendly forum and the community can help you choose out the perfect name for your Year 12 Jersey. Have anymore awesome Brooklyn Nine-Nine nickname ideas? We would love to hear about them! Also, we’d love to see your jerseys in action. Use the hashtag #exoduswear with you wearing your awesome Year 12 Jersey so we can see!