Louis Vuitton’s Spring/Summer collection 2016 was unveiled earlier this year, featuring a line of decadent embroidered satin bomber jackets. Although this season has just passed for those in the northern hemisphere, spring and summer are just arriving here in the south.

These jackets are not exactly a brand-new idea as they’ve existed since around the time of World War II, where Sukajan (souvenir jackets) were made for soldiers to commemorate their times in Japan (read our earlier post for more on this). This explains the traditional imagery (like cranes and tigers) often used. LV has reimagined the sukajan with luxury materials and detailed design. The return of sukajan in 2016 was not limited to Louis Vuitton but was also seen on the runways of Saint Laurent and Valentino.

What we love about the LV bombers are the rich tones they have used. The use of deep reds and blues give an extra air of luxury. Pairing this with the oriental detailing gives a sense of indulgence. The fabric is almost luminescent, which complements the dark tones perfectly. The soft blush and grey coloured jacket stands out from the rest. The addition of more subdued tones added a refreshing and feminine contrast to the collection while still adhering to the lavish vibe.

More recently, Cynthia Rowley has released a small fall collection, which also includes a particularly stylish embroidered satin bomber jacket. Arden Cho is pictured wearing this gorgeous piece, which is actually reversible. The reverse side features a blush colour, similar to the ones produced by LV. Featuring a more modern embroidery gives it a contemporary look.

The Blush Side of the Bomber, Source

The satin bomber is really a must-have as it’s not only beautiful but completely practical. It can be dressed down or dressed up easily as it’s both casual, yet classic. The satin bomber brings together high-class materials with the classic bomber shape, creating a piece that’s transferable from day to night. 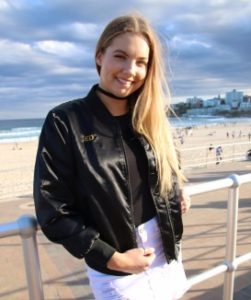 With Louis Vuitton’s jackets selling for over $2000 right now and Cynthia Rowley’s at $525 so they may leave a small dent in your pocket. Luckily for you, we have you covered! Exodus Wear have just released individual customised bomber jackets starting at $125! They have the same satin finish, high-quality lining and we even allow customisation of the front and back.
Go to the SHOP NOW tab or contact us to find out how we can create the perfect custom satin bomber for you!