11 yr old Romesa’s six page report: ‘Why I would love a cat’

Home/Social Media/11 yr old Romesa’s six page report: ‘Why I would love a cat’
Previous Next

11 yr old Romesa’s six page report: ‘Why I would love a cat’

Have you ever wanted a pet cat or dog so much that you would stop at nothing to get it? Would you write a detailed report to your parents? and in it tell them the benefits of having said pet? That is exactly what one 11 year old from Texas did. Romesa’s six page report to her parents details the reasons she wants a pet cat. And this report has now gone viral!

So, what did she write?

In Romesa’s six page report about cats, Romesa states the reasons she wants a cat. They are adorable, fluffy and make her feel less lonely. She even goes so far as to say it would help her get off electronics. Most parents would be glad of this, maybe.

She then goes on to detail the benefits of having a cat. She states that cats can increase a child’s self esteem. They can also warn you of health issues such as seizures.

Romesa also proves herself to be one smart girl. She plays up to the consciences of her parents by writing that many animals, such as cats are put down every day! She writes that ‘…cats need us. They are dying. What is better than saving a life? They need us and I need a cat and it would change my life forever.’ Who could say no to this? 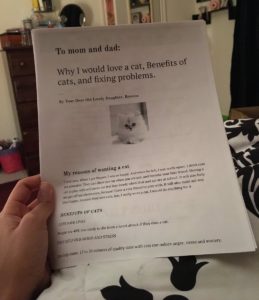 Romesa’s older sister posted about this report on twitter. And since then, over 3,000 people have liked the post or were interested in Romesa’s dedication to writing such a long report.

Who knows if Romesa was successful or not in her quest? One can only hope that her parents at least considered her report which was probably highly researched.

So if you ever want a pet cat or dog, maybe you should try writing a detailed report on the benefits of having a pet. At the very least it will give your parents something to think about. So getting your writing cap on and start writing! You never know what might happen!

You can read this story in more detail from: http://www.huffingtonpost.com.au

For other stories, life and study hacks, and study tips head on over to: https://www.exoduswear.com.au