The 13th episode of ABC’s My Year 12 Life takes place in the students 13th week before final exams. Tom F still feels heartbroken after his split from long-term girlfriend, Nicola; Zoe formulates a strategy to fight the overwhelming power of procrastination in an attempt to manage her stress levels; and Trianna is devastated about shocking news about her grandpa, but finds her own way of saying her farewells. 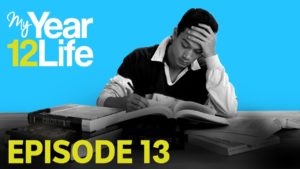 This episode, Tom F is still finding it difficult to let go of his relationship with long-term girlfriend, Nicola. The lack of routine and structure that he had gotten so used to seems the most difficult aspect to accept for this young adult. He constantly texts his ex, largely in the hopes that she will change her mind, and they will get back together.

Extra pressure is added to his school week when he shares his report card with his parents. His parents are mostly happy with his performance but they urge him to dedicate more of his time to study. The pressures of guardians on their children to perform well in their final year can be immense, and I speak from experience! Though some guidance and pressure is imperative, too much can cause unnecessary stress for the already flustered student. At the end of the day, the only thing your parents desire is for you to perform your best and succeed.

After attending prom with Nicola, Tom F truthfully realises at the end of the episode, that the whole ordeal with Nicola is just an unnesscary distraction, and decides to put away his feelings for her, at least until the end of the school year. Relationships, especially romantic ones can be a huge distraction from study! Trust me, you’ll have plenty of time after school to find your one true love <3

Zoe describes how she attempts to combat procrastination. She encourages herself to do all homework and assignments straight after school, and early in the morning on the weekends, so she can feel good later, and not worry about the daunting prospect of doing it later. When completing each task she rewards herself with a celebratory dance. Her dance moves were pretty impressive, I must admit.

Zoe also highlights the harsh and pointless social hierarchy of school and her personal experience from being ex-communicated from the “popular” group. She admits that mean people can be popular, and nice people uncool. She decides that she would be rather in a nice group of people and unpopular than jeopardise her own set of values. We second that, Zoe!

And finally, after getting disappointed about an English exam, she reasons that her ATAR doesn’t reflect on her true self and she shouldn’t base herself from her marks. She also highlights the pressure of anxiety has and the feeling of being lost in your final year. She tries to find strategies to cope with this, and tries to refrain from distancing herself from people. Maintaining a balanced life and clear head is a must, especially when you come closer to exams!

At the start of this episode, Trianna explains her grandpa is unwell. She describes how she is unsure if she believes in the religion that she was brought up with, but regardless, in the hopes in doing anything to help her grandpa, decides to pray. Regardless, of what you believe, praying, self-reflection and meditation is a great way to cope with a traumatic experience.

Unfortunately, later in the episode, we are heartbroken to find out her grandfather has passed away. Trianna is distressed as only her father can fly over and attend the funeral, separating her family in such a heart-wrenching time but she finds some comfort in attending church at school. It is often in times of great trauma we go back to our roots and find comfort in what we know. Trianna also says her goodbyes to her grandfather on social media, saying that it’s her way of commenting her grandpa to the world!

If there was anything in this episode you found interesting and you want to continue the conversation, why not head over to our friendly forum and you can discuss with the community. You can watch this great show anytime on ABC ME’s YouTube Channel as well as ABC iVIEW. Check it out!