This weeks episode is filmed only 10 weeks before the 14 students final tumultuous exams. Shianna battles with her own negativity whilst dealing with some drama at school; Alfie obsesses over preparations for his 18th birthday bash; and finally, Kayla decides whether to let go of her tap dancing hobby to focus on study, and she receives an interesting text from one of her brothers friends. 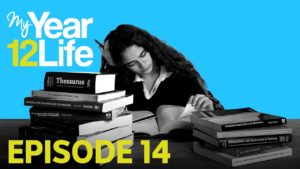 You can catch this killer show on ABC, ABC ME, ABC iView, or their YouTube broadcasting counterparts.

After bubbling up all her energy, trying her hardest to keep a clear head at school the pressure of the final year finally shows on Shianna. She underlines the struggle of having enough time to study at night, weighed down by set homework from her teachers.

As her trials looms, she decides to have a few days off school to avoid the pressure from peers and teachers; she’s frustrated how everyone stresses the upmost importance of these exams. In a heartfelt rant, Shianna eventually breaks down and explains how wrong it is, in her view, for the country to compare students against eachother and make them compete against one another for university entrance. She’s over expectations, and she’s over certain people at the school, and realises that no one understands how lonely and down she feels. Overall, she’s tired of having to prove herself to people.

As the date is finally in striking distance, Alfie is once again distracted by the prospect of his birthday bash, and he starts to plan it. Drama unfolds, as he realises that he has invited too many people (200 of his friends), and he has the awkward task of un-inviting a selection of his friends.

However, despite this, Alfie gets in the spirit of his self-celebration and pierces his nose, ears and gets a new hairstyle! The day finally arrives, and Alfie hits the dance floor having a great night with his friends.

Kayla describes how she has to put so many of her hobbies on hold this year in anticipation of studying hard for the final exams and maintaining her ranking. She has to decide whether she wants to forego dancing classes bevause she doesn’t see a future in dancing. One of Kayla’s brother’s friends asks her out for a coffee, which she finds a little awkward! But knowing that her brothers would not want to date their friends, she decides not to.

At the end of the episode, Kayla realised that dancing was a good stress buster and she can use it to realise some stress from her life. And she realises she really does enjoy dancing. It’s always good to have a creative outlet, especially when you are in the middle of a stressful period in your life.

You can catch more episodes, or re-watch this one on Youtube or ABC iView. If you want to continue the conversation why not head over to our friendly forum and our community will have a chat! Make sure to use the hashtag #myyear12life