Tensions rise as it is only a month until the final exams on this episode of My Year 12 Life. Kayla is distracted, counting down the days until her birthday, Alex heads to Poland to represent Australia in ultimate frisbee, and Tom F calculates how much he needs to get to pass all his subjects and get the ATAR he needs.

You can view this awesome show on ABC, ABC iView and ABC ME and their Youtube counterparts. 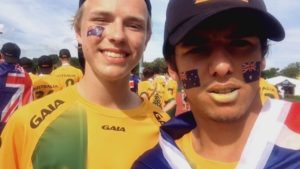 Kayla is excited that her birthday is in nine days! However, she is stressing out and overwhelmed because she has so much school work to do, but little time to do it.  When the day finally arrives, Kayla has a beautiful eighteenth and she says she had the best night, and got a bit rowdy.

Kayla is also dissapointed when she believes she has done well in an english exam but when gets the result back she gets a poor mark, according to her. She says that she had been marked pretty unfairly, and she hates that she didn’t finish with a bang.

At the start of the episode Alex talks optimistically about his future, and how he had to make the descision whether to follow a trade in Year 10. He highlights how stressful it wa shaving that weight on your shoulders when you are so young and no nothing of where you want to go in life.

When he finds out that he has been chosen to represent Australian in an international ultimate frisbee competition, he has to choose between the games in Canada or in Poland. Due to the difficulty of the time zone and other issues to contact his school or access the work he has to complete for finishing Year 12, he decides to choose Poland.

At the start of the tournament Alex’s team didn’y perform that well, but gradually got a bit of a comeback at the end of the tournament. He has to go back to school a few days after the tournament, and doesn’t look forward at the amount of homework he has to do.

Tom has one more test before he can succesfuly say he passed his final year, at least in his maths subject! He has to get 51% in his last class test, otherwis he cannot pass the subject. Also, more stress is added as he leans he has to move house again. Its the fourth time in a year that he has to move houses, and the fact he still has to do a test brings even more stress.

Tom passes his test and to celebrate and show gratitude to his teacher, gives her a canvassed photo of his own creation.

Did you like this episode of My year 12 Life? Why not head over to the forum and start a conversation with the community.