In Episode 8 of My Year 12 Life it’s 23 weeks until final exams and again the hit tv show features key issues and pressures that many young adult’s face in their final years. This week follows the diary vlogs Trianna, Tom and, my personal favourite, Shianna. The key issues this week were the highs and lows of friendship groups, the rocky shores of relationships in your final year. 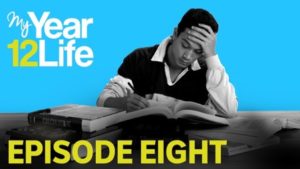 As their final year is usually high with the stress of a heavy workload as well as being a formative year for most young adult’s, old friendship groups can strain and new ones can unwittingly flourish. This is the case for Trianna, who finds solace in a new group of friends in her final year. She states that she grew apart from her old group the previous year, and the small group of friends found each other in similar circumstances. This outlines the case for many final year 12 students and you might have the same situation with your own school friends. You begin to question if you are actually friends, or whether you are simply friends for the sake of being friends.

Relationships of the Rocks

The episode, focusing around the issues of Tom and Shianna, outlines the extra stress one can feel during their final year at school if they are in a relationship. Shianna expresses her frustration at what seems to her to be petty fights with her boyfriend. She sees a future with him but is uncertain whether he feels the same towards her. At the end of the episode, after a confrontation, she resolves to forgive him but with what seems like more caution. The same, unfortunately, cannot be said about Tom’s relationship with his girlfriend. After months of drifting apart, she finally decides to call of their relationship which leave Tom seemingly heartbroken. We will see if this will have an impact on his motivation to strive at school…

If you are addicted to the drama of this killer show as much as we are you can watch episodes on Youtube on the ABC ME channel. If you want to discuss anything about the show, why no head over to our forum and let us know.